I’ve always had a soft spot for Emery Walker’s House. My connection to it goes back to 2001, soon after the future of the house was secured but well before it opened to the public. I began a five year, part-time stint as the Conservation Cleaner. 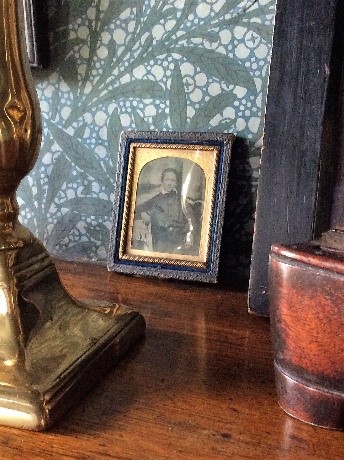 As I swept, dusted and hoovered every nook and cranny I imagined the Walker family and Elizabeth de Haas inhabiting the house over the previous century. If only walls could talk! The ‘spirit of place’ was palpable. I had the sense that this was still their home, their private space full of their personal things. I was there to do a job, but it was still an odd experience in those early days and sometimes I felt like I was trespassing.
I became used to handling the objects, textiles, books and pictures. And I don’t just mean ‘handling’ in the museum sense with gloves, but actually how their surfaces felt, their weight and smell, their fragility and quirks, how their placement contributed to the composition and connected with objects around them.
Even though the cleaning was repetitious (like the nearby Thames, London’s dust seemed tidal), there was always something new to discover. So when, after a gap of ten years, the opportunity came to volunteer in the Arts & Crafts Hammersmith Project I jumped at the chance. 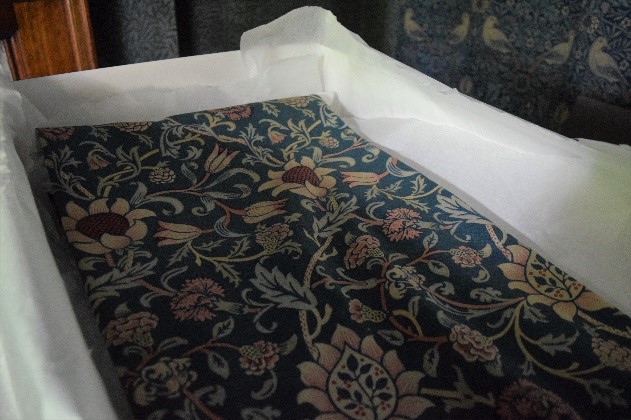 I helped in the mammoth but well-run task of packing up the house, de-canting the contents to the Stockwell facility, then unwrapping, cataloguing and photographing each item.
When removed from their domestic setting and viewed inside the forensic-like, secure lock-up, each object came into sharper focus. 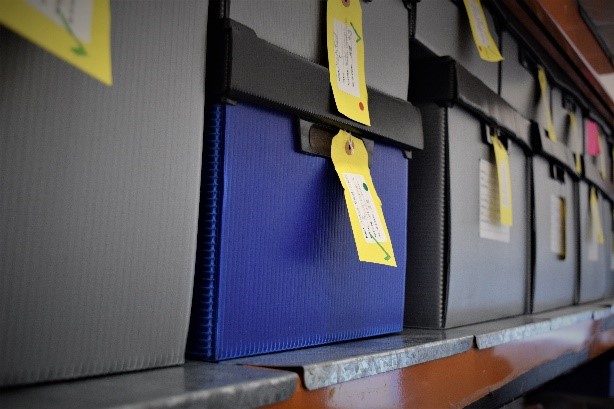 Literally displaced, these were things made temporarily homeless. Yes, this was a museum collection, but it was first and foremost a family collection – which belonged at 7 Hammersmith Terrace. 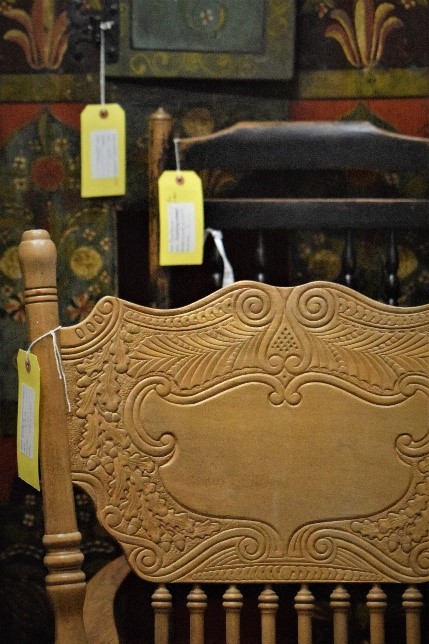 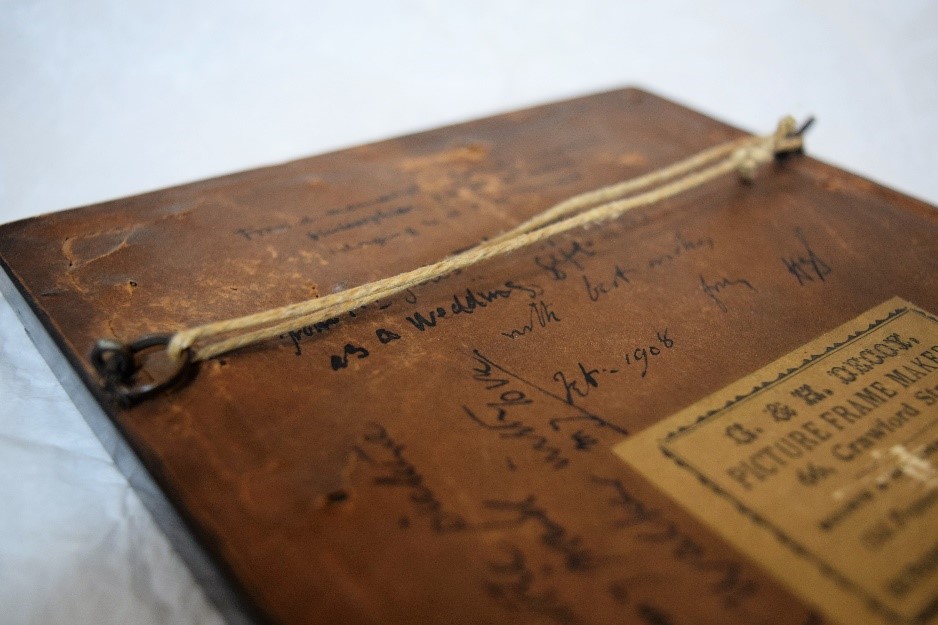 The process of cataloguing allows time to really study each item; to read inscriptions, notice fine cracks and repairs, marvel at the hand-stitching, and wonder at the occasional mystery object that seemed to have no apparent purpose.
Unpacking each item took you on a journey and sparked curiosity. A small fragment of stone inscribed in pencil with the words ‘Malta Sept 1928 (Tarxien)’. Did Emery Walker visit Malta in 1928, shortly after the discovery of ancient temples on the island, and scavenged a stone souvenir?
Here is a small selection of some more of my favourite things photographed in storage…..
An early ‘strike-off’ or sample of ‘African Marigold’ from Morris & Co. Designed by Morris and registered in 1876 – dye trials were started in May 1876. 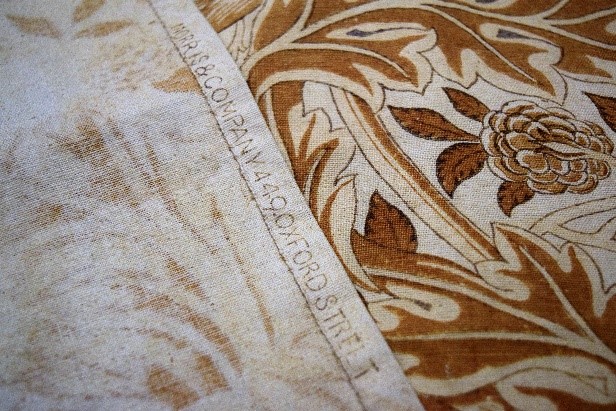 A pair of William Morris’s spectacles. 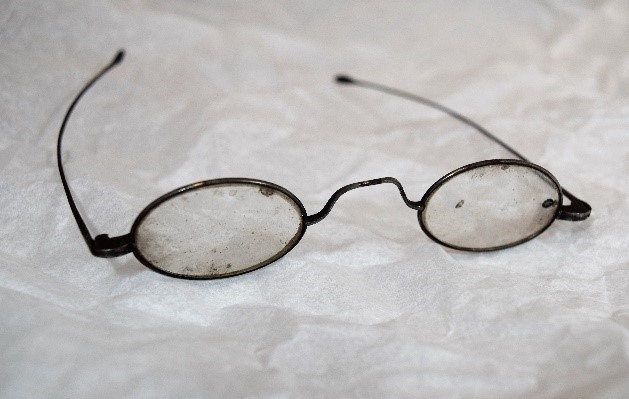 A soft, hemmed piece of linen cloth, resist dyed in blue.
A small hand-made bag in ‘Lea’ (indigo discharged and block printed cotton), a design by William Morris, registered in 1885. 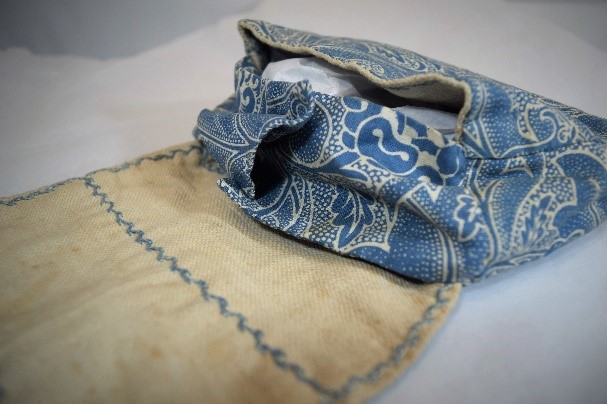 A pair of Moroccan leather slippers, stained blue and decorated with gold stars. 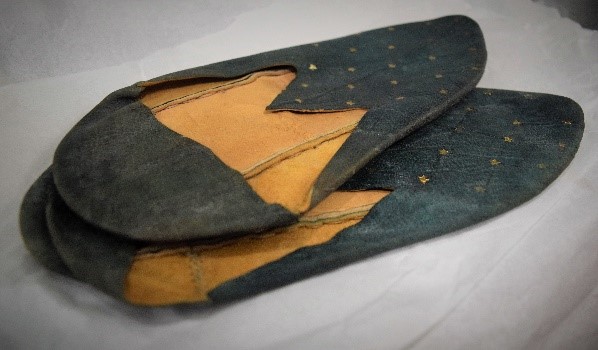 As each week of the re-instatement passed it was wonderful to see the efforts of the other volunteers and staff – each room moving nearer to completion. Seeing the house as an enormous jigsaw puzzle with all its pieces safely slotted back into position was hugely satisfying for those of us who know it well.
And now that the house has re-opened to the public, and with guided tours booking up, there are dozens of people waiting to walk across the threshold, possibly for the first time, to discover for themselves the treasures within.